When I taught 7th grade five years ago, it seems like every problem could be solved with a proportion. We spent a lot of time talking about matching up units and ratios when solving a proportion, then we would come to similar triangles and the students wouldn't know what to do, so they would set up their proportion all willy-nilly. So I developed this system for teaching similar figures and I have used it ever since, including just last week when I reviewed similar triangles with my Geometry class. 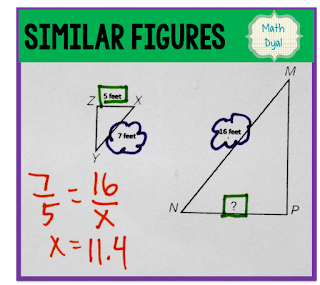 I have students match up the corresponding sides with shapes. In the picture below XY corresponds with MN, so we drew a cloud around those side length. ZX corresponds to NP, so we drew a box around those side lengths. Then when we set up our proportion, we make sure that the corresponding sides are neighbors and the side lengths in the same triangle are neighbors - either one on top of the other or next to each other. I make sure they know that "neighbors" does not include diagonally. 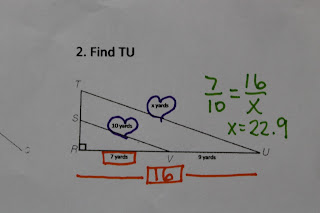 Matching the side lengths up like this really helps the students to visualize the proportion. If we have markers handy, we use those too, but I know when they take their assessments, they will not have markers or highlighters so drawing the shapes around the numbers will always work.
Since I know similar triangles is so heavily covered in middle school, I covered it pretty quickly with my Honors Geometry class. They did great setting up the proportions after we talked about how to place the numbers. 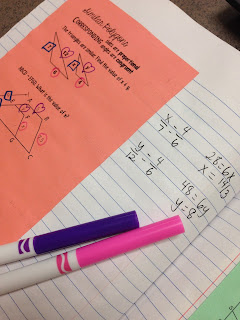 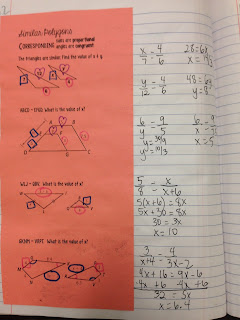 And the standard shadow and mirror problems as well as some nested similar triangles. 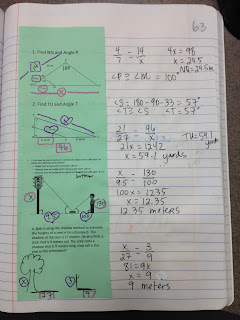 I LOVE these doodle notes from Math Giraffe. They were a perfect way to introduce the Triangle Similarity Shortcuts, which are really easy for my students since we spent so much time on congruent triangles. 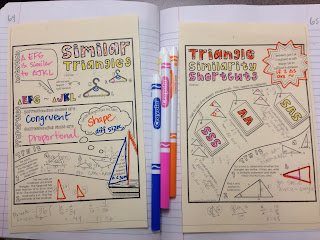 On Day 3, we took some notes about proportions in triangles and then practiced all types of similar triangles problems with some book work. 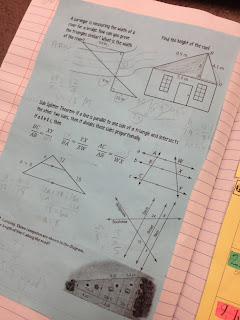 Then I tried something new for this mini-unit. I gave them a partner quiz. I told them they had to agree on an answer. I heard some AWESOME discussions while students were doing this. They were really working together well because they had a quiz grade riding on it. They did so well - I may have to try another partner quiz, plus it cut my grading in half ;)